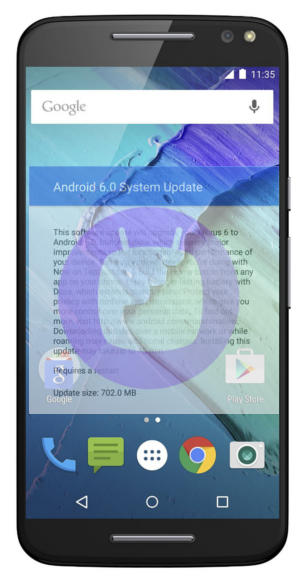 1. Doze mode: you will get longer battery life for your Moto X

One of the noteworthy new features in Android Marshmallow update for Moto X is the new doze mode.

Doze mode helps to preserve the battery life of your Moto X automatically when it is not being used.

When your Moto X is stationary,  not charging and not in use for a long period of time, Doze mode shuts down unnecessary background processes automatically. This can increase the standby time of your Moto X substantially.

The better news is that Doze mode is enabled automatically and you need not do anything. It is a built-in feature of Android Marshmallow 6.

When you exit from an app, the app actually may be still in memory so that you can quickly re-access it.  For some apps, you can even continue the previous session.

This makes your Android device very responsive and efficient without reloading the app. Android will decide whether the app is kept in memory or not based on the available resources.

But some buggy apps may cause battery drain if it is not fully “frozen”.

App standby in Android Marshmallow update for Moto X  will address this issue for such apps.

Android Marshmallow will put inactive apps into deep sleep state automatically. These apps will not be able to run any background processes before you explicitly open them.  After you exit from these apps, after a while, they will be put into the deep sleep state.

Because App standby feature in Android Marshmallow update may affect the behavior of the apps, you can whitelist some apps to exclude them from App standby.

For example, if you use a third-party email app, you may want to whitelist it if you want the app to check emails in the background periodically.

3. Expandable storage: you can use SD card just like internal storage

For owners of Moto X Style and Moto X Pure edition (2015) ,  you can get more value from the micro SD card after applying Android Marshmallow update for Moto X.

Android Marshmallow update allows you to enable SD card as:

Please note, if SD card exists in Moto X when you apply the Android Marshmallow update for Moto X, the SD card will be mounted as portable storage. You can use it as before the update.

Because internal storage in Android Marshmallow update is encrypted, when the SD card is adopted as internal storage, it is formatted and encrypted.  This means the SD card cannot be removed and directly transferred to other devices (you need format it again).  You can only access the files on the SD card when it is on your Moto X phone.

4. Now on Tap: get customized Google Now on any pages

If you still not using Google Now, you are wasting your Moto X.

Google Now is now context-sensitive and is everywhere on your phone after the Android Marshmallow update.

On any app page, you can tap and hold the home button to get Google Now relevant to the current app page.

Now on Tap not only offers you relevant info from Google knowledge graph on the topic of the page but also some actionable options (if applicable), for example, to place a call, to send a message, to open an app or to add a calendar event.

5. Full control of App permissions: your device, you rule!

A new permissions model was introduced in Android Marshmallow. All apps designed for Marshmallow will only ask for permissions at the time when needed.

You can modify the permissions granted to apps, or check permissions by type and see which apps have that permission granted on your Moto X, after applying the update.

6.  Do Not Disturb: old wine (downtime) in new bottles

In Android Lollipop, Downtime was introduced to help you automatically silence the phone and manage interruptions.

The new Do Not Disturb feature allows multiple automatic rules by time or event.  The settings can be a bit daunting.

But in a nutshell, you get more controls and it is easier to tweak it to meet your needs.

You can press and hold the volume key to adjust your ringtone volume, then tap the down arrow in the volume slider that appears at the top of your screen to adjust the media and alarm volume.

Android Marshmallow update now lets you decide what the right action is for each of your apps when you tap a web link.

There are three actions you can set:

The sleeping and meeting assists are now through the new Do Not Disturb (#6 in this list) with some twists. The setting is not as intuitive as that in the old Motorola Assist.

Driving and places assists go nowhere. You can manually turn on Talk to me in Moto App. But you cannot play music automatically while driving, or keep quiet automatically at certain locations.

You will very likely miss the Motorola Assist.

Motorola Migrate will NOT be supported in Android Marshmallow update for Moto X.

Anyway, you can find many alternatives to this.

Of course, there are a few other new or changed features in Android Marshmallow update for Moto X, for example, direct share, Moto display.