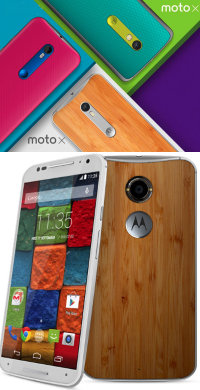 Anyway, Motorola now gives you the choice. If you don’t use it, it will never hurt you Moto X 2015.

Moto X and Moto X  2014 were criticized heavily for its mediocre camera.

In Moto X 2015, you will see a big update for the camera, both rear camera, and front camera.

The improvement in the front camera is even more significant.

The front camera is updated from 2MP in Moto X 2nd gen to 5MP. The new front camera also boosts wide-angle lens, f/2.0 aperture and night mode.  You can even use the screen as a flash for your selfies.

The 5.7″ QHD screen is simply gorgeous. Of course, the 520ppi is surely overkill for our eyes.  It is better for an eagle than for a human.

But overall, you will find it is more comfortable to look at. It is also good if you want to edit photos or videos on your Moto X 2015.

Moto X Play has a CPU in a lower tier: 64bit Qualcomm Snapdragon 615, which is often found in upper-middle-range smartphones in 2015. The CPU is surely not as powerful as Snapdragon 808.  But it is sufficient for most daily tasks.  Most flagship smartphones are actually overpowered.  The lag you can feel in some flagship phones is often due to the poor customization of Android vendors.

Anyway, if you are a heavy game player whose smartphone is always very hot, Moto X Play may disappoint you. For the majority, you will not feel the lag thanks to the near-stock Android in Moto X 2015.

Again, for most users, you will not feel the difference.

Motorola finally says NO to bloatware and stupid customization from carriers, at least in Moto X Pure edition.

This is really a big deal.

You will get a pure Moto X from Motorola. Period.

Moto X Pure Edition will work on almost all networks, even when you travel globally.

Of course, Moto X Pure edition is officially available in the US only.  If you are living in other regions, you have to get  Moto X Style, which may give different experience depending on carrier and region.

If you do not mind the local warranty, you can get the Moto X Pure edition from Amazon (US) and some American retailers. Please note, Motorola does not offer an international warranty.

Moto X 2015 user manuals can be found on this page.